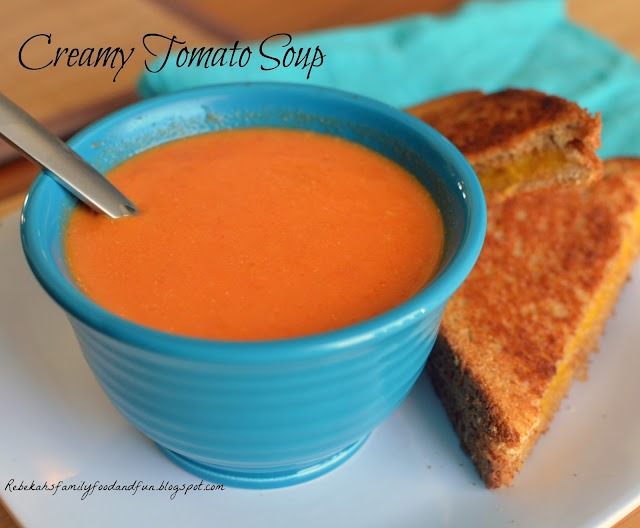 Oh, it was fine if mixed into another more substantial soup or chili, but alone? No thanks.

Well, that might have been because the only tomato soup I had eaten was from a can.

So recently when Corban asked if I would make grilled cheese and tomato soup for lunch sometime, I decided to try my best to oblige him. But it had to be homemade - my stipulation, not his.

This was the first recipe I found, and since it sounded really good and simple, it was an easy choice.

It starts with a quick saute of onions and garlic in butter and olive oil, followed by the addition of a can of whole peeled tomatoes and a few spices. A bit of vegetable broth adds some volume and flavor as well. After being pureed in the blender, the finishing touch is a bit of heavy cream, adding some depth of richness and texture.

Delicious by itself, but even better with a grilled cheese sandwich dipped in, this soup pleased the whole family.  You can't ask for much more than that.

And compared to that soup from a can? This blows that out of the water. No joke. This is the real deal.