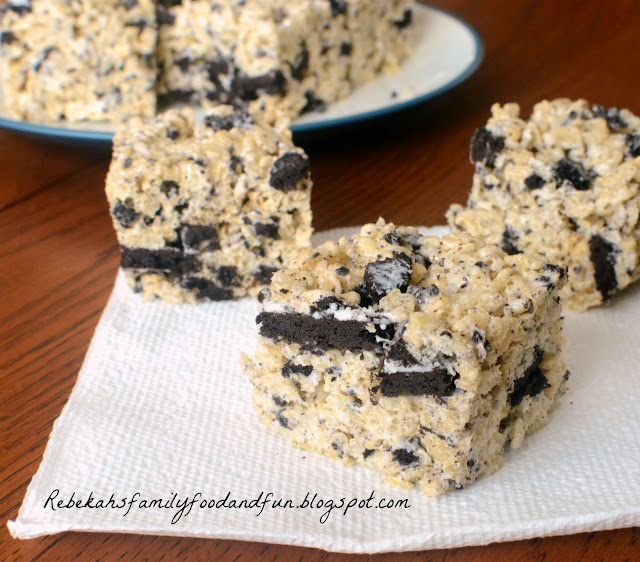 We had a church fellowship meal recently and I decided to make two desserts.
I had noticed a "trend" the past two fellowship meals of there being plenty of main dishes, but very few desserts.....and.....well......that just wasn't acceptable to me.
I think there ought to be enough for each person in attendance to have at least one of some sweet treat.

I had already made a batch of these bars...(which turned out just as good as I remembered them) and was considering what to make for the second dessert.....when I suddenly realized that I had marshmallows and crispy rice cereal in my pantry (which doesn't always happen) and half a bag of Oreos left over from the other dessert.

Um, yeah....that sounded good.
And easy.
Since I was also making 6 pizzas and hosting a birthday party for my mom that night, I needed something easy.

Most people like rice crispy treats, plain or otherwise.  Adding Oreos in there makes them extra fun and delicious.

Note: I like the treats to be a little thicker than the standard recipe  - so I use more than one package of marshmallows and more cereal.  If you only have one 10 oz bag of marshmallows, use 3 Tbsp. butter and 5-1/2 cups cereal.

Spread a light layer of butter over the bottom and edges of a 13 x 9" pan.  Set aside
In a large saucepan or dutch oven, melt the marshmallows and butter over low heat, stirring constantly.  As soon as it is smooth, remove from heat.  Stir in vanilla.
Immediately pour in crispy rice cereal and cookies, stirring to coat evenly.
Press into the 13 x 9" pan.  If mixture is too sticky to press well, get a little water on your hands and it should be much easier.
Let set at room temperature until cool.  Cut into squares and serve. 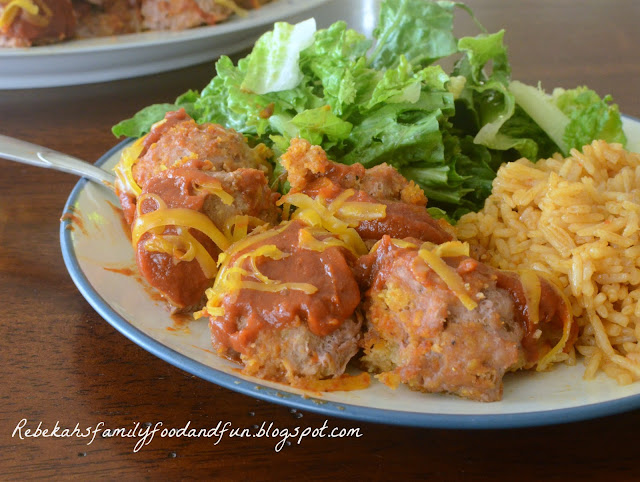 Happy Belated Mothers Day to all of you dedicated, terrific moms.  I hope your day was full of blessings with your family.

We have a Mother's Day tradition of going out for Mexican food around dinner time. It all started the first year we were in Virginia, which was my first Mother's Day as a mom.  We were originally going to the Outback for dinner, but upon discovering the wait was 2 hours, we changed our mind real quick on that one.

A quick drive around that part of town revealed that all the restaurants were packed to the gills.
We had a 6 month old with us....and waiting super long was not an option.  We ended up deciding to try this small Mexican restaurant in another part of town and were delighted to get seated right away, served quickly, had a delicious meal, and even got 1/2 price for my meal.  Oh, and a free dessert for me.  :)  And I just remembered - Corban drank from a straw for the first time at the restaurant that night.  We were so impressed at such a young baby doing that.
We were out of there and home watching the season finale of Survivor (yes, I'm an addict) before we even would have been seated at the Outback.

So our tradition has continued to this day.  And I love it!
This year we got the pleasure of being with my parents and younger sister also, which made it even better.

Tex-Mex cuisine has always been a favorite of mine, and fortunately Grant and the kids agree.  So it wasn't hard to pick something fun like Enchilada Meatballs for my Secret Recipe Club feature this month.
My assigned blog was Angela's Kitchen, which is an amazing resource for anyone looking for gluten-free or dairy-free recipes.  Angela is quite the expert in gluten and dairy free recipe development and living and teaches classes, consults, and speaks in various outlets.

She has lots of recipes that interest me......such as Sundried Tomato Stuffed Chicken,  Teriyaki Chicken,
and Better Than Nutrigrain Bars...and even plenty of baked goods, although most of those required specialty ingredients that I don't have on hand.

I did not make these meatballs gluten free or dairy free - I had my regular cornbread leftover from dinner the night before and I used real cheddar cheese on top, but Angela's recipe will tell you how to do it if you desire.

We loved the meatballs - they are moist and just a little spicy - which can be altered depending on what kind of enchilada sauce you use. They make a great dinner served with Mexican rice and a salad, or they would be a fun appetizer or hor d'oeurve for a party as well.

Preheat oven to 350°F.
In a large bowl, mix together, ground turkey, corn bread, cilantro (if using), salt, pepper, and 1/2 cup enchilada sauce. Form into 1-inch meatballs with your hands, or use a medium cookie scoop, which I prefer.   Put meatballs on a rack on a rimmed baking sheet, or just line the sheet with foil and place the meatballs on that.  Bake for 15-20 minutes, until cooked through.  Put in a serving dish.

To serve: Thaw.  Pour sauce over meatballs in a baking dish or sauce pan. Heat through. 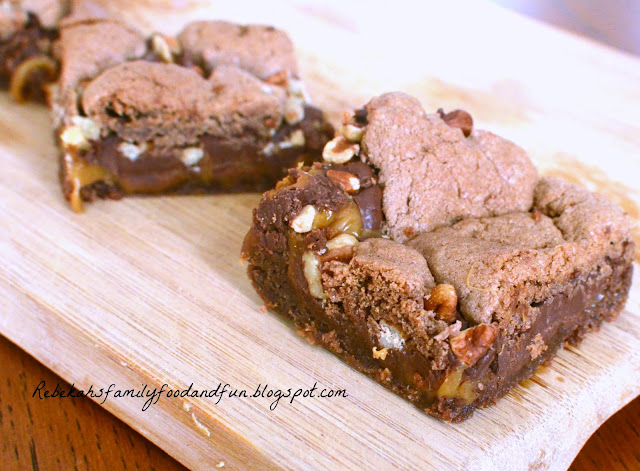 I had a busy day on Saturday.

We hosted a birthday party for my mom in the evening, which involved making 6 homemade pizzas, plus some chocolate syrup to serve with the ice cream and these brownies, which I had made on Friday.  My Aunt Bonnie brought an amazing salad with spinach, strawberries, candied pecans, feta cheese, and a fabulous dressing.....and Anna pitched in with a fruit platter of orange slices and grapes.

It was nice to end the day with such a lovely time...since the morning was......well, challenging.

A couple of months ago, I got the urge to sign up for a 5K.  I have never been a runner or even enjoyed running remotely.  I played basketball and volleyball in high school and tolerated the running those required because I loved the sports, but I truly always hated running.
However.
The realization hit me a few years ago that people who are really runners are never overweight.  They always look great - and they usually are just super healthy people.  I figured that if I started running occasionally, it would be a good variation from the exercise DVDs I was accustomed to doing. We bought a used treadmill from Grant's brother and I used that exclusively.  Very convenient in any weather and I could pop in a video for the kids to keep them busy.  I still disliked running but I did like making progress.
Pregnancies took a big toll on me and I ended up with some recurring knee issues, so my running was never as consistent or my achievements as quick as I wanted.

Then we moved and my exercise routine went out the window for a few months while we were settling in and dealing with various illnesses.  Finally, I started back up my twice a week runs on the treadmill and worked up to running 3 miles in 30 minutes.  I decided that I would be much more motivated to keep running if I signed up for a real race.  I thought that early May would be perfect timing - not too cold, not too hot...you know, because I wasn't used to running outside and didn't want to deal with any extreme elements.
My sister Anna signed up with me - so we could race together.

I started training outside about 4 weeks ago, running on a paved trail near our house.  I quickly discovered that running outside is significantly harder than the treadmill.....wind resistance and hills and all that.  But race day was soon approaching and I had to get those runs in - at least three a week. 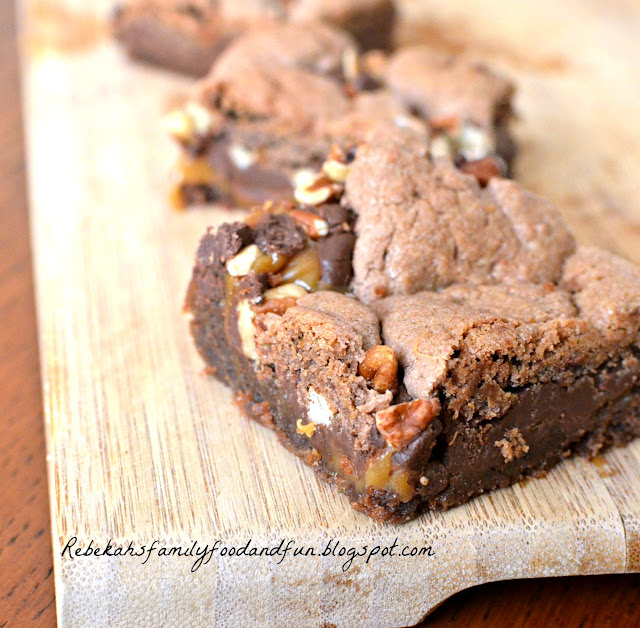 Last Wednesday, we had 80° weather.  Friday, there was an inch of snow on the ground when we got up.

Saturday, the big race day, we had a lovely 35° morning, with a wind chill a few degrees colder.  Oh, and we can't forget the snow.  The constant, light drizzle we had on the drive over there turned to huge snowflakes that soaked into our clothes and pelted us in the eyes while we ran.  Seriously.  This is Arkansas on May 4th, not North Dakota.

My face nearly froze off.  I couldn't even talk for minutes after the race because my lips were so numb.  But we finished, with a grand time of 30:37.  Anna could have finished faster.....she stuck with me as I walked up part of the looooonnnngggg hill near the end of the route.  I actually ran the route a minute and a half faster a few days earlier (you know, back in normal spring weather), but running in winter conditions was entirely new to me.  I'm a bit of a wimp when it comes to cold.

So on to the brownies.  Mom didn't want the usual cake for her birthday - she requested this specific recipe, which she got from a friend years ago.  I have no idea where the original is from.

They're rich, chewy, and super easy to make, and a great ending to a 5K day....or pretty much any day.

Oh yeah, and they're killer with some vanilla ice cream and homemade chocolate syrup.

Preheat oven to 350°.
Unwrap caramels, place in a medium sauce pan and add 1/4 cup evaporated milk.  Set aside.
Mix cake mix, melted butter, and remaining milk (by hand, using a fork) in a bowl.
Spread 1/2 of dough mixture in a lightly greased 13 x 9" pan.  It will look like you won't be able to cover the bottom of the pan, but just press it in thinly.
Bake 10-12 minutes and remove from oven.  Let cool a little - slightly warm to touch.
While dough is baking, melt caramels and 1/4 cup evaporated milk on the stovetop. (Alternately, you can melt them in a bowl in the microwave on low for 2-3 min - stir and check consistency - repeat for 2-3 minutes on low until smooth).
Pour melted caramel sauce on top of baked dough.  Sprinkle with chocolate chips and pecans.
Drop remaining dough by teaspoons full on top.  It probably won't completely cover the top.
Bake until the cake portion is dry (15-20 minutes).
Cool and serve.