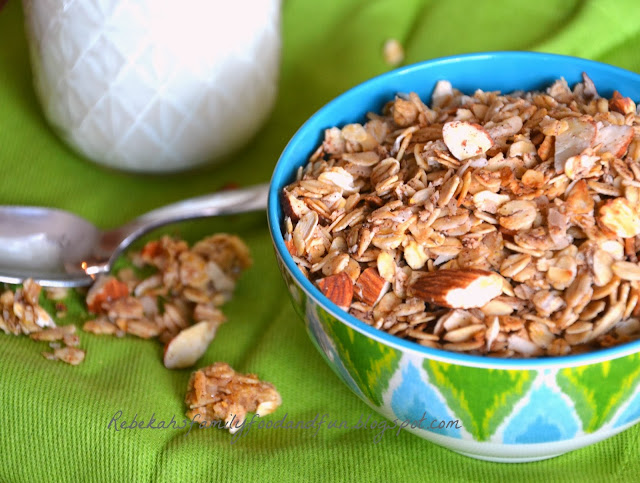 Are you ready for Thanksgiving yet?  Got the menu all planned out, groceries purchased, and just counting down the minutes till you can stick that turkey in the oven???

Okay, maybe I'll start planning a little earlier.  I still have to coordinate with my mom and other family members on who is making what, though.....so I can't really do too much planning yet.  I CAN tell you that I'm pretty darn sure I'll be making a Pumpkin Cheesecake for dessert - and maybe a Pumpkin Roll Cake for good measure.
Because you can never have too much pumpkin and cream cheese.

Oh, and I can't forget, no Thanksgiving would be complete without some variation on pecan pie - I like this Caramel Pecan pie , but the traditional version works too.  Just as long as there's plenty of homemade sweetened whipped cream.  Mmmmm.  Can you tell my favorite part of the Thanksgiving feast is dessert?

You can't tell me you're surprised.

In the mean time, there's a few meals between now and then, and one of my favorite breakfasts is granola.

I've been making this version for several months now and just can't seem to get tired of it.  I know there are lots fancier granolas out there, but this is simple and consistently good.  So good that my 2 year old is known to sneak the container out of the pantry and hide under the dining table, stuffing it into her face (and scattering it on the floor) as fast as she can before she gets caught.

But what's not to like?  There's coconut, chopped almonds, cinnamon, and vanilla accompanying the oats.
You can always add raisins or craisins or other goodies at the table if you like.  I usually just eat mine as is, with whole milk, of course.

Major bonus - it smells incredible while it's baking.

Preheat oven to 300°.
Combine oats, coconut, and almonds in a large bowl.
In a medium saucepan over medium heat, combine coconut oil, brown sugar, water, honey, and cinnamon and bring to a boil.  Remove from heat and add vanilla and salt.  Pour over oat mixture and stir well to evenly coat.
Spread on 2 large rimmed baking sheets and bake for 10 minutes.  Remove from oven and stir, and rotate pans so the one from the bottom shelf is on the top and vice versa.  Bake for 10 more minutes, or until desired crispiness.
Posted by Rebekah at 4:46 PM 2 comments: 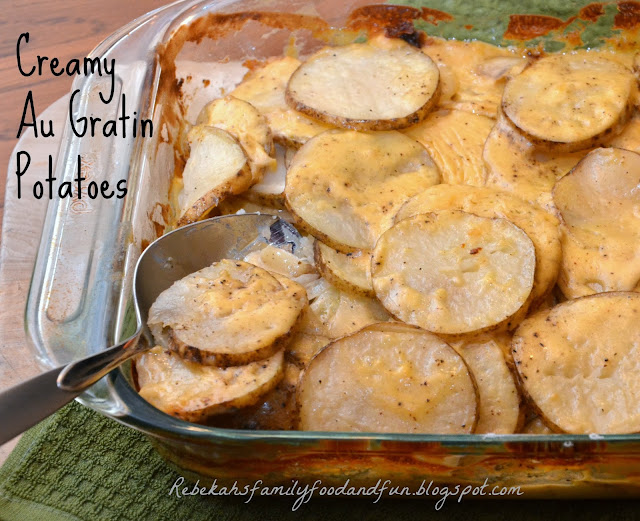 If you're looking for a special potato dish for Thanksgiving, Christmas, your birthday, or next Thursday, I've got a winner for you.

Although they take awhile to bake, these potatoes are simple to put together and are definitely worth planning ahead for. They're tender and hearty, enhanced with thinly sliced onions, and drenched with creamy cheese sauce. A potato-lover's dream come true.

Although my mom would occasionally make a similar dish called scalloped potatoes when I was growing up, I can't remember ever making them myself.  But when I saw these on my Secret Recipe Club assignment for the month, Cheese Curd in Paradise, I knew I had to make them.  I need more scrumptious side dishes in my repertoire.

Ashley blogs from Wisconsin (hence the "cheese curd" in her blog title), a state that I have never visited but would love to see someday (in the summer, thank you very much).  Any place known for their cheese has to be amazing, right?  I can't imagine my life without cheese.

She has lots of great recipes, from Pizza Muffins to Pumpkin Truffles, that I'm looking forward to trying - but I am beyond happy to have these potatoes in my life.  While they are a bit on the decadent side, I'll definitely bring out this recipe for special occasions and dinners.  Everyone in my family absolutely loved them.

Preheat oven to 400°.
Layer half of the potatoes into bottom of a buttered 13 x 9" pan. Sprinkle lightly with salt and pepper.Top with onion slices, and add the remaining potatoes. Sprinkle again lightly with salt and pepper.  (I like to use Kosher salt.)
In a medium saucepan, melt butter over medium heat.  Mix in the flour and stir constantly with a whisk for one minute.  Slowly stir in milk.  Cook until the mixture has thickened.  Stir in cheddar cheese and continue stirring until melted.  Season cheese sauce with salt and pepper to taste, and add a dash of paprika if desired.  Pour over potatoes and cover the dish with foil.
Bake for 1 1/2 hours.  Remove foil and cook for a few more minutes to slightly brown the top if desired.
Posted by Rebekah at 12:00 AM 12 comments: