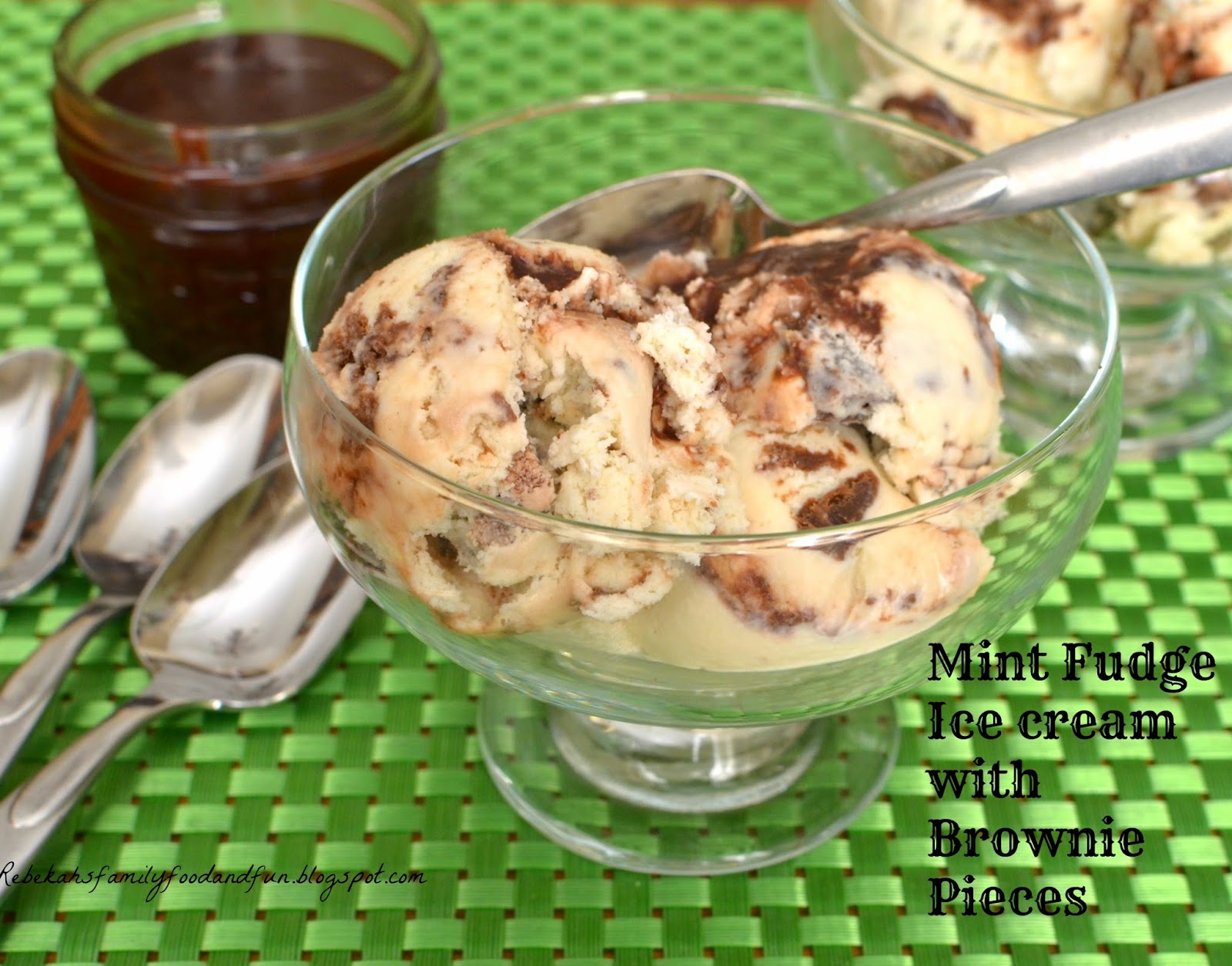 So when I saw this recipe on my assigned blog for the Secret Recipe Club, I knew it was the perfect choice. Well, that and because she said it was quite possibly the best thing she had ever made. That nearly requires a taste test, don't you think?

So my blog this month was Pale Yellow, where Tracy has some seriously awesome baked goods (and lots of other selections as well, but I was irresistibly drawn to the sweets, as usual).  Caramel Snickers Bars, Brown Butter Biscoff Rice Crispy Treats, and Chocolate Peanut Butter Whoopie Pies were a few of the delectable treats that caught my eye, but I just kept thinking about this ice cream. 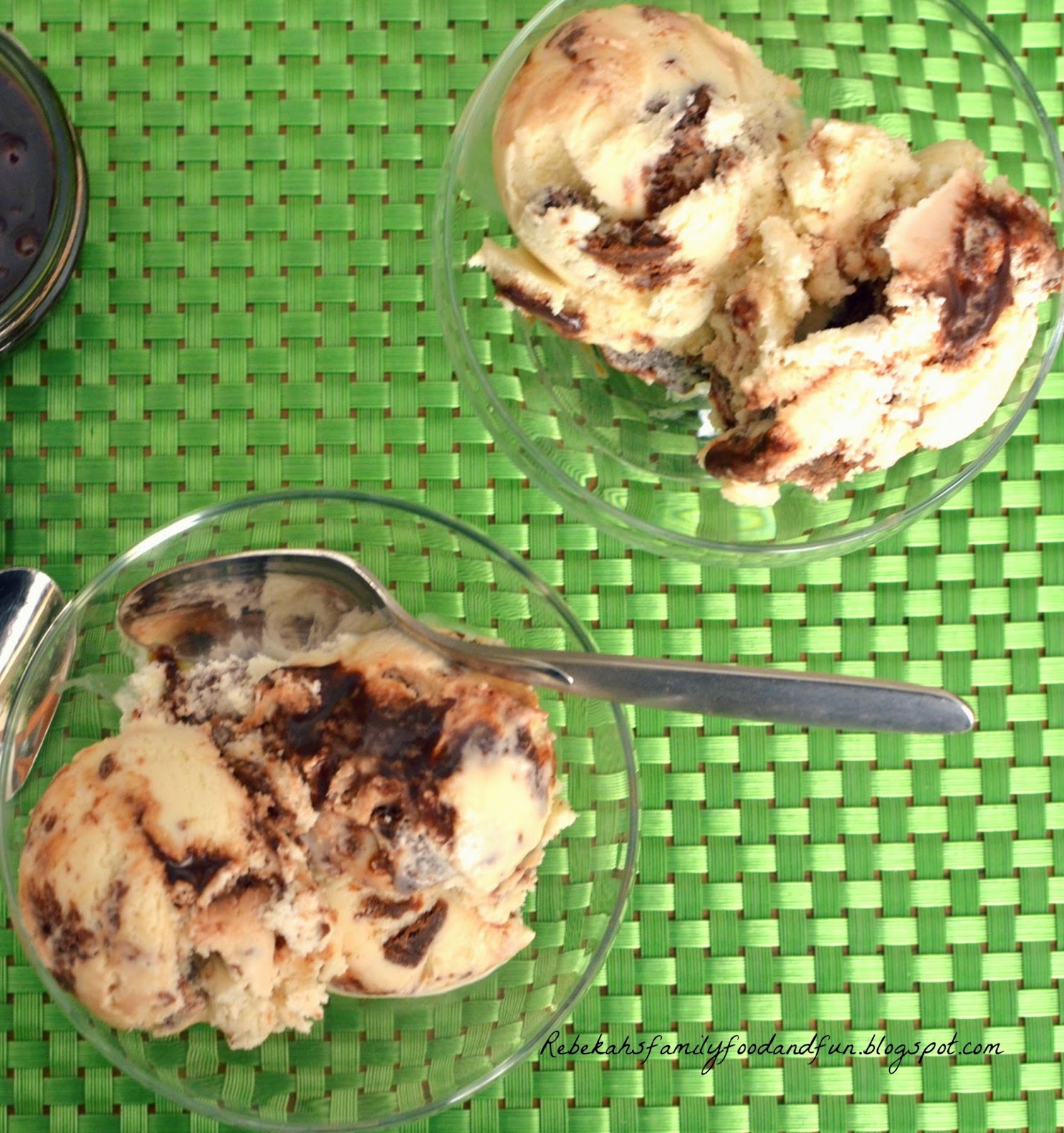 Now here's the thing. You have to plan ahead to make this - the ice cream mixture has to chill before being churned, the brownies need to be baked, cut into chunks, and frozen, and the fudge sauce made and chilled before you can combine it all together. So give yourself a day to get all the components ready (or at the very least, start very early in the morning), and then complete the recipe the next day.

I've used mint extract lots of times, but this recipe uses real mint leaves, simmered right in the milk and cream to impart that real mint flavor. I was amazed at how delicious it was - the flavor is so authentic with no aftertastes. Sublime.
Combine that with fudgy brownie chunks and an incredible fudge sauce swirled through every bite - and you have a little bowl of heaven. Totally worth the time invested to make it. And the calories.

I was running short on eggs, so I didn't use Tracy's egg-based ice cream - I just used the normal vanilla I make except with the step of simmering the mint leaves added in. I also didn't use the fudge sauce that Tracy did, because it uses corn syrup, which I try to avoid. Instead I used this very simple sauce and thought it was fantastic.

This ice cream received RAVE reviews from every member of my family - and Grant, who often times would just as soon eat store bought ice cream as homemade, couldn't stop talking about how awesome it was. Then a friend who stopped by for dinner loved it so much that he declared that I should go into business selling it - that he would pay $30 a gallon for it. I call that a WIN!

Note: You will NOT use all the brownies that the recipe makes in the ice cream itself. You can easily cut the recipe in half if you don't want as much  left over and bake it in a 8 or 9" square pan. Or you could freeze the leftovers. OR you could make brownies from a box if you want. But these brownies are super delicious and definitely worth trying, just on their own. Crackly on top, dense, rich, and fudgy, you won't regret making them.

Combine milk, sugar, and cream in a saucepan. Add mint leaves and heat/steep on low, stirring occasionally, for 30-40 minutes. Do not let come to a boil. Remove from heat and pour through a fine sieve to remove the leaves. Stir in vanilla and pour mixture into a bowl to chill, preferably overnight.

Combine all ingredients except vanilla in a small saucepan and bring to a boil. Boil for 1 minute, then remove from heat. Stir in vanilla. Pour into a jar and refrigerate until cool. You won't need all of it for the ice cream - but you can always pour extra on individual servings if desired. It will last in the fridge for several weeks. Sauce will thicken up and can be made pourable by microwaving for 15-25 seconds.

Preheat oven to 350°F.
Grease a 13x9" pan with butter. Set aside.
Using a double boiler, or a bowl set over a pan of simmering water, melt the butter, chocolate, and coffee powder. Stir often. Once thoroughly melted, remove from heat. Stir in sugar and brown sugar and whisk to combine. In a small bowl, whisk eggs together until well beaten. Add to chocolate and sugar mixture along with the vanilla and stir well.
Switch to a rubber spatula and fold in the flour, salt, and cocoa powder. Stir just into combined.
Pour into greased pan and bake for 25-30 minutes, until a toothpick inserted comes out with a little bit of batter.
Cool completely.
Cut some of the brownies into small chunks, place on a wax paper lined dish, and freeze until ready to stir into the ice cream. You won't use all the brownies - probably only 1/4-1/3 of them. That's okay. The brownies are completely awesome on their own. :)

To put it all together:
Churn ice cream according to your manufacturer's direction.
Fold in the brownie chunks until evenly distributed.
Spread about a third of the ice cream into a container, drizzle with fudge sauce, Repeat with the second and third layers. Freeze until firm. 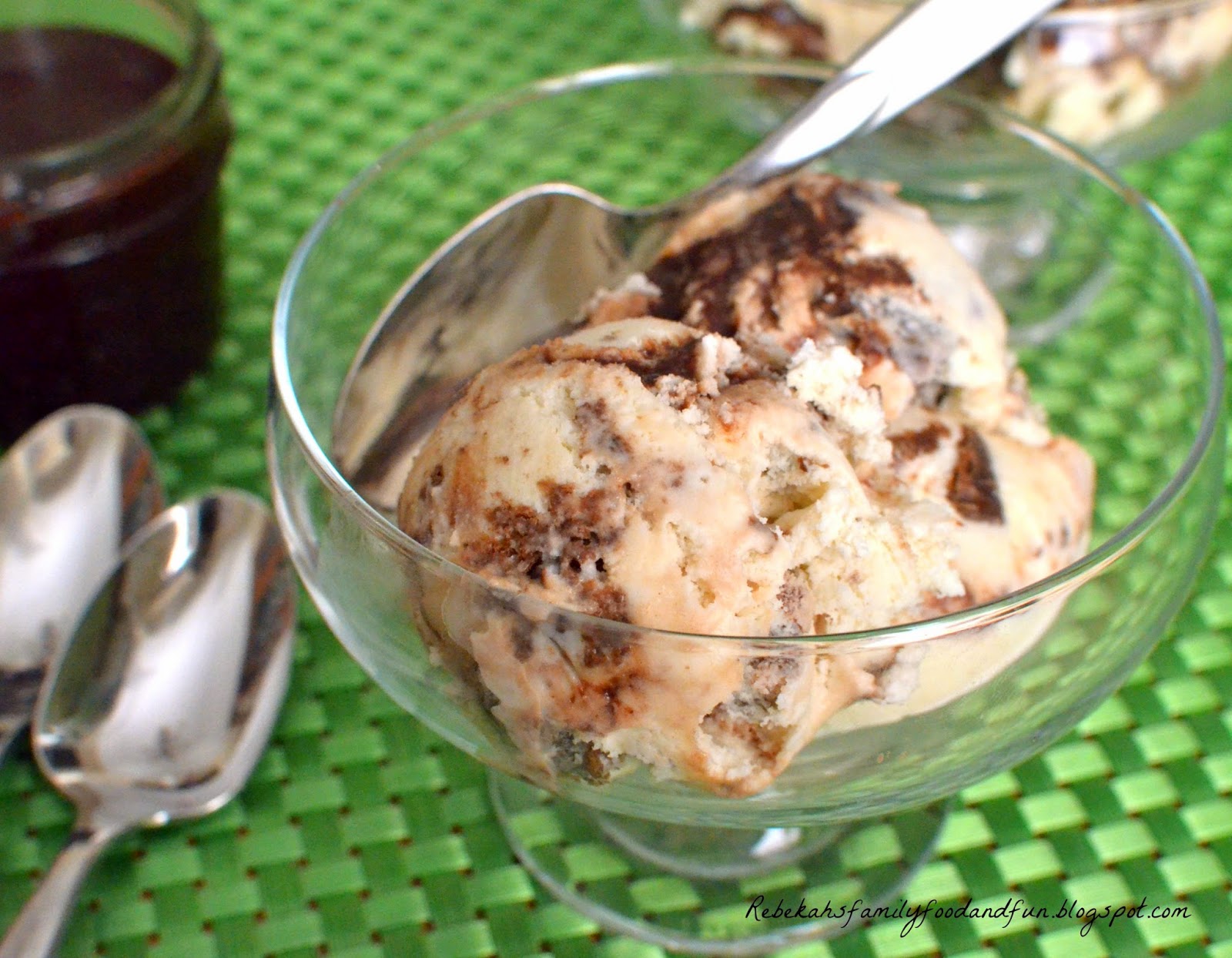 An InLinkz Link-up
Posted by Rebekah at 12:00 AM 7 comments: 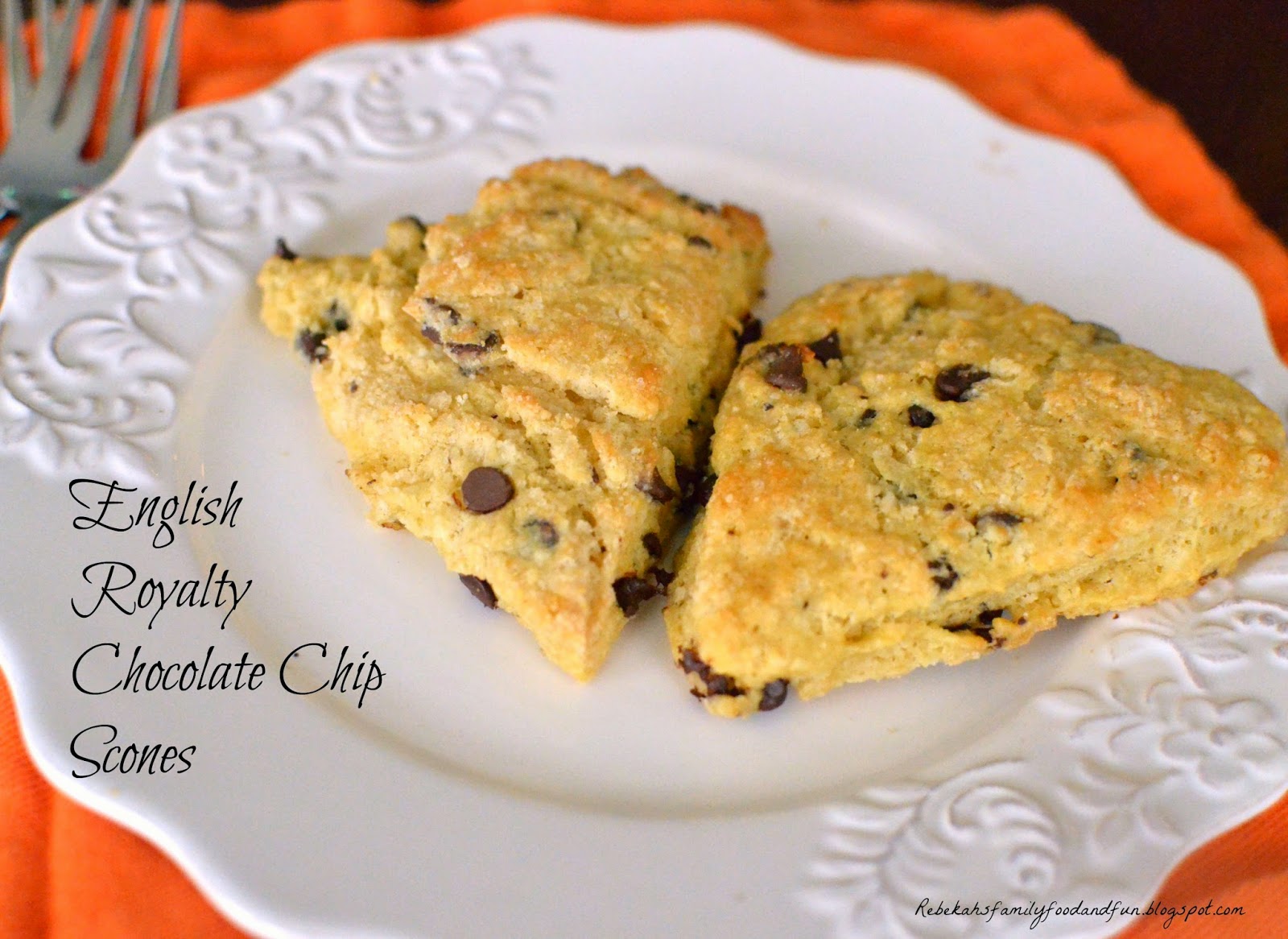 First day of March and we're surrounded by snow and ice.

Church was cancelled due to hazardous driving conditions, and the children spend the morning doing one of two things: the older three were sledding on the ice-covered snow in our yard, while the little two were "swimming" in my bathtub. Ha!

We were supposed to have a fellowship meal after church today, with the theme being "Breakfast/Brunch". I was planning on trying a new scone recipe, one for which my sister Anna has received many rave reviews and frequent requests from her friends.

Well, since I had been thinking about these scones all week and quite anxious to try them, I decided a trial run must be necessary. After all, I might need a little practice to get them perfect before next week. (Read: I'll use any excuse I can think of to make scones.)

While most scones use cream or milk as the liquid binder, these scones are particularly unique with the use of orange juice instead. I'm sure fresh squeezed OJ would be absolutely fabulous, but I just used regular and they were still wonderful. You could even use a little orange zest for an extra burst of flavor if you wanted.

We absolutely adored these scones. Sweet, tender, almost melt-in-your mouth texture. Nothing like the dry, crumbly kind you often get with purchased scones. The hint of orange was delightful with the little chunks of chocolate scattered throughout each bite.

While oftentimes I make a glaze for scones, and I did contemplate making a simple one of powdered sugar and OJ for these, I ultimately decided to leave them plain (and save a few calories) and we didn't miss the glaze at all.

Note: I fully realize most people have no need for 24 scones. This recipe can be easily halved if you desire. However, you might be surprised at just how quickly these disappear. And you could always freeze the leftovers to pull out and warm for a quick breakfast treat.

In the bowl of a food processor, combine flour, sugar, baking powder, and salt. Add butter and process until the mixture resembles coarse crumbs. (If you don't have a food processor, you can use a pastry blender or large fork to cut in the butter. I recommend using a large grater to grate the butter into the flour mixture , which makes cutting it in much faster and easier.)

Remove from food processor bowl and pour into a large mixing bowl. Stir in chocolate chips and mix in orange juice to form a dough.

Turn out the dough onto a floured surface. Divide into 3 sections and pat each one into a large circle about 1/2 inch thick. Cut each circle into 8 wedges and transfer onto the baking sheets.

Bake in preheated oven until golden brown, about 12-14 minutes. Move to wire racks to cool.


Source: Adapted from Allrecipes
Posted by Rebekah at 1:07 PM No comments: