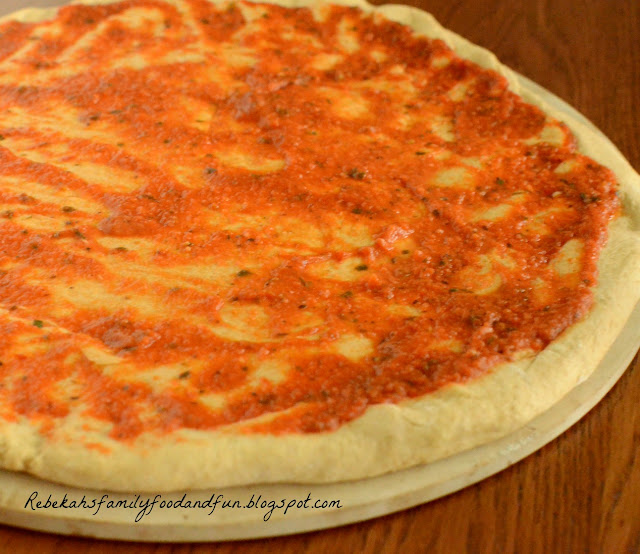 I don't know about your family, but mine goes crazy for pizza.
I most commonly make Barbecue Chicken Bacon Pizza, but lately I've been making this sauce
and just making plain bacon pizza.
I've tried several variations on homemade pizza sauce over the years, and this one tops them all.

Grant was so surprised when he first tasted it......he declared it his absolute favorite sauce.
Now, the original recipe called for 2 tsp. of red pepper flakes - I thought that would be a little much for our tastes and toned it back to half a teaspoon.  It's just right for our family - but you can certainly up the heat factor if you want.

I love that it makes a big batch and I can freeze half for later.....making my next pizza baking day a lot easier.  I love that it has no artificial ingredients or corn syrup or anything objectionable like that, unlike the store bought sauces.  And I love that it's so inexpensive to make.

You can leave the sauce chunky with the tomatoes if you prefer - but since I have several kids who swear they don't like tomatoes, I don't dare even try that option.  Smooth is best for us.  I run it through the blender for a few seconds and we're good to go.  Everyone's happy, and the pizza is delicious.

Combine all ingredients in a medium saucepan over medium-high heat.  Bring to a boil, then reduce the heat to a simmer.  Allow to cook for at least 15 minutes.  Remove from heat.  If you prefer a smoother sauce, pour the sauce into a blender and process until chunks of tomatoes are broken up.  You could also use an immersion blender if you have one.  You can leave it chunky if you prefer.
Store in an airtight container in the refrigerator.

Yield:  Enough for 5-6 14" pizzas, depending on how thick you like your sauce.