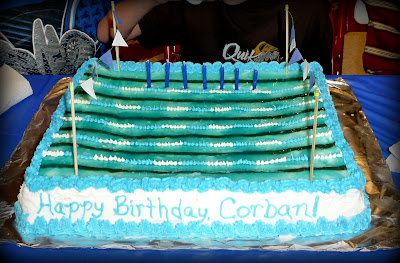 Corban's 7th birthday party was held at an indoor pool, so I felt it fitting to make his cake a swimming pool.  I did the colors on the lane markers and flags just like the real pool. Nothing too fancy here....

The main challenge of this cake was the water effect.

I researched online on how to do it.....and the general conclusion is that piping gel is the best medium for such a task. The first recipe I tried called for 2 packages of unflavored gelatin, dissolved in 2 T. of water, heated, then mixed with 2 cups of corn syrup and heated again.

I had a whole box of Knox unflavored gelatin in my pantry.  It had actually been given to me by a friend who was moving and didn't need it....oh, say about 8 years ago.

I don't use unflavored gelatin much.  Okay, ever.


I searched the box thoroughly for an expiration date.....couldn't find one.  But seriously....does gelatin ever go bad?  I've never heard of such a thing.

I proceeded to make the recipe exactly as directed.  The gelatin never quite dissolved all the way, but I thought it would work itself out.  Ha.

Well, here's what I ended up with. 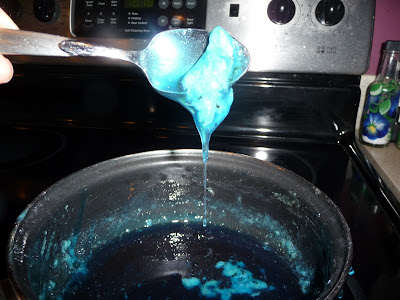 Ever seen the 80's John Cusack movie "Better Off Dead"?  I wouldn't recommend it really, very goofy, but there's a scene in there where the spacey mom serves up this goop for dessert that ends up crawling off his plate.....well, let's just say that my piping gel was pretty much like that.  Ugh.

So I had to try again.  I found another recipe on Cake Central that didn't include gelatin and gave it a shot.

In a small saucepan, whisk together sugar and cornstarch.  Add lemon juice slowly, followed by water.  Bring to a boil over medium-high heat, stirring frequently.  Allow to boil for a minute or two, then remove from heat.  Add food coloring as desired. 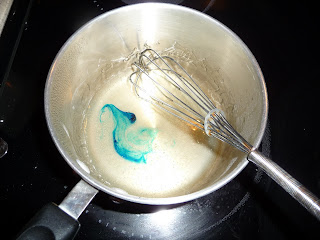 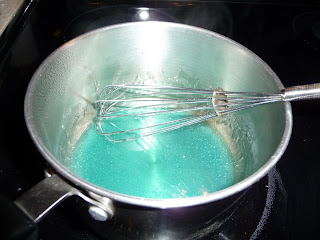 All nice and watery looking.
It set up pretty much like jello in the fridge overnight, so before putting it on the cake, I had to warm it and stir a lot to get it more spreadable.  I ended up making another batch because I was knew the first batch wasn't enough...turned out perfectly.  I just mixed the fresh, hot batch into the one from the night before and stirred them together well.
Then I just spooned it carefully over the cake, spreading it gently.  It was surprisingly easy to do.  After that, I just piped the lane markers with white and blue buttercream.
Just to be clear, the piping gel tastes fine, but it is definitely lemon tasting, so it was a bit weird with chocolate.  Most of the adults scraped it off.  The kids seemed to love it.  I think it would taste good with a yellow or lemon cake.  Texture is still kind of strange, can't get around that.
Altogether, Corban was delighted with his cake and even the lifeguards at the pool seemed pretty impressed. 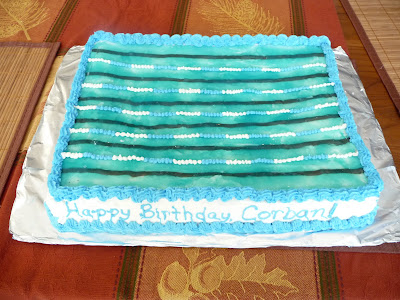 Picture before adding the backstroke flags. 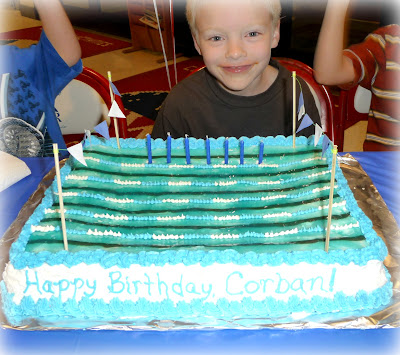 Corban with his cake and two buddies' elbows.
This recipe is linked to the Ultimate Recipe Swap: Birthday Cakes
Posted by Rebekah at 12:50 PM