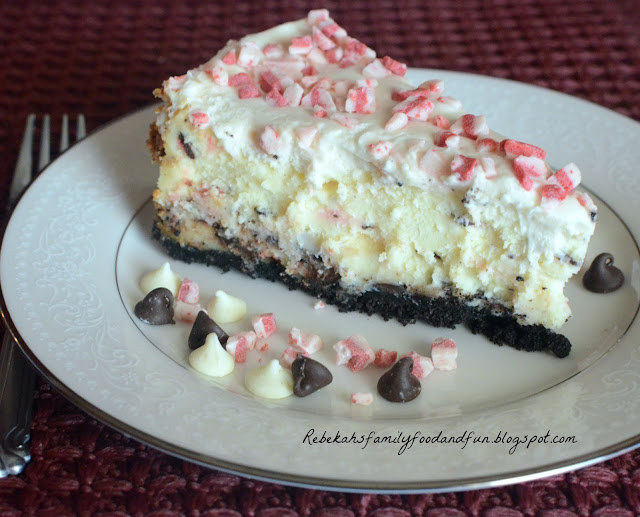 You know the old saying, "Better late than never"?

So totally applies here. Nearly three months has passed since we indulged in this incredible cheesecake.
This was the dessert I made for Christmas Eve......and I made a second one as a Christmas gift for my brother and his girlfriend.

However, I think that peppermint is a perfectly acceptable flavor all year round, and I refuse to wait till next Christmas season to share this recipe.

It certainly takes several steps and requires at least a couple of days to make, since you have to make the peppermint bark a day before making the cheesecake.  (Well, I suppose you could toss the bark in the freezer to firm up faster, so you could rush the process, but it doesn't hurt to plan ahead. )

But it is definitely worth the wait.

Line a rimmed baking sheet with parchment or wax paper.

Prepare candy canes by unwrapping and tossing in a ziplock bag.  Smash with a meat tenderizer, rolling pin, or other heavy object.  Don't pulverize the candy, but don't leave any huge chunks either.  Place in a fine-mesh strainer and shake gently (over the sink or garbage) to remove the dust.

In a medium sized bowl, place milk or dark chocolate and 1/2 tsp. oil.  Melt in the microwave in 30 second intervals at 50% power.  Stir well after each 30 seconds.  When fully melted, add 1/8 tsp. peppermint extract. Stir well.  Spread out evenly on prepared pan.  Sprinkle with crushed candies. Refrigerate for 30 minutes or until chocolate has set.

Repeat process with white chocolate.  Store in the refrigerator until ready to use.

Preheat oven to 350°.  In a blender or food processor, blend cookies until they're fine crumbs. Stir together with melted butter.  Press into the bottom of a 9" springform pan.  Bake for 10 minutes.  Set aside.

Cut up peppermint bark into small pieces.  Set aside

Melt 4 oz. white chocolate in the microwave or in a double boiler.  Stir until smooth.

In a large bowl or stand mixer, beat cream cheese until smooth. Add sugar and mix well.  Scrape bowl well prior to each new addition and as needed.  Add melted chocolate, flour, heavy cream, salt, and peppermint extract.  Mix well.  On medium/low speed, add one egg at a time.  Mix until smooth, but don't overbeat.

Pour filling into crust and bake at 325°F. for 1 hour.  Turn off the oven.  Keeping the door shut, leave the cheesecake in the oven for an additional 45 minutes.  Remove and allow to sit for at least 1 hour before chilling.

Chill 4 hours or overnight before adding the mousse.

To make the mousse, begin by making whipped cream. Pour the heavy cream in a medium bowl and beat with an electric mixer until stiff peaks form.

Carefully remove the side of springform pan.  Spread mousse mixture evenly over cheesecake. Chill for at least a couple of hours before serving.

Store covered in the refrigerator. 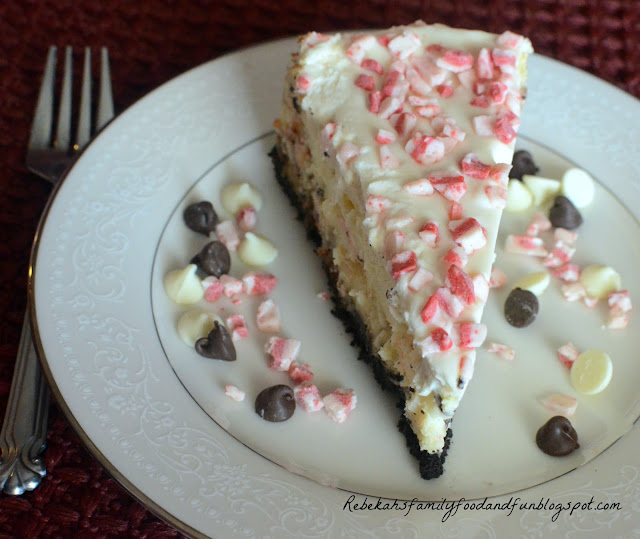