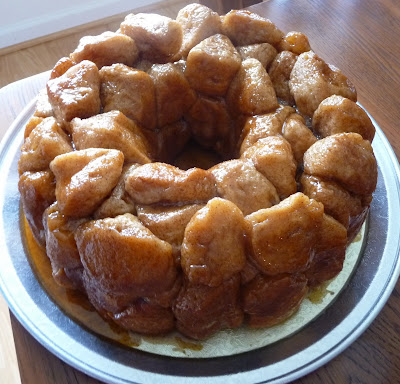 Another winner of a recipe from the Pioneer Woman here. Well, the recipe isn't hers, it was submitted by her occasional guest poster, Pastor Ryan. Anyways, it's still a winner. I made it for my recent MOPS meeting and was delighted that it wasn't all eaten, because that meant I could munch on it at home. Grant saw it on the counter when he got home from work and initially thought it looked unappealing, but when I convinced him to try it, he didn't want to stop eating. It's that good. In fact, when I mentioned that I might make it for Christmas breakfast, he commented, "So what are you going to make for everyone else?" Smarty pants.
I'm posting the recipe exactly as I read it, but I'll note that I did not follow instructions all the way. I ran out of time to let it sit for 15-30 minutes before removing it from the pan, and I ended up with a pool of butter on my counter and on the dish. I don't know if it would have sunk in more if it had sat for awhile, or if the recipe would just be better with a little less butter. I'll tinker around with it. Regardless, I WILL be making it again, probably many times. Personally, I would love to add some chopped nuts, but a couple of people in my family aren't big nut eaters, so maybe I could just do nuts on half. Works for me! Maybe that would keep Grant from eating the whole thing.....
Recipe
3 cans buttermilk biscuits (non-flaky regular size biscuits, not Grands)
1 cup sugar
2-3 t. cinnamon (I used 2.5)
1 cup (2 sticks) butter
1/2 cup brown sugar
Preheat oven to 350. Remove biscuits from cans and cut each one into quarters. In a gallon size ziplock bag, mix the sugar and cinnamon. Toss the biscuit quarters into the bag and shake well, coating each section. Pour into a bundt pan. Don't worry about greasing it.....all that butter will make it come out just fine. In the microwave or on the stove, melt the butter with the brown sugar. Stir until it's all one color. Pour over the biscuits. It will look like a lot, but don't fret.
Bake for 30-40 minutes, or until nicely browned on top. Allow to cool in pan for 15-30 minutes, if you can. Invert onto a plate and eat up.
Posted by Rebekah at 9:23 AM